With its alluring blend of golden pagodas, colonial villas, terraced rice fields and fishing boats, Vietnam offers a refreshing twist on Asian culture and traditions. Take a cruise on the breathtaking Halong Bay, cycle through the charming streets of Ho Chi Minh City and gorge on some sticky rice with our Vietnam Packages. Vietnam snakes along the eastern edge of the Indochina Peninsula bordered by China to the north, Laos to the northwest, C Read More

With its alluring blend of golden pagodas, colonial villas, terraced rice fields and fishing boats, Vietnam offers a refreshing twist on Asian culture and traditions. Take a cruise on the breathtaking Halong Bay, cycle through the charming streets of Ho Chi Minh City and gorge on some sticky rice with our Vietnam Packages.

Vietnam snakes along the eastern edge of the Indochina Peninsula bordered by China to the north, Laos to the northwest, Cambodia to the northwest, Thailand, Philippines, Malaysia, and Indonesia. As a result of its unique location in the heart of Southeast Asia, the nation draws hundreds of thousands of visitors hoping to experience its stunning natural beauty and fascinating culture on their Vietnam Tour Package.

Vietnam Packages often begin in the capital of the country, Hanoi. Located in the rustic north of Vietnam, Hanoi is a buzzing city littered with the best Vietnam attractions including pagodas, cafes and relics of its colonial past. One of the city’s biggest attractions is Ho Chi Minh Mausoleum which you will visit on our Vietnam Tour Package.  A solemn memorial to the Vietnamese revolutionary leader Ho Chi Minh, the mausoleum is the final resting place of the leader and of the most important monuments of the country. The somber granite structure is reminiscent of Lenin’s Mausoleum in Moscow, Russia and houses the embalmed body of Ho Chi Minh in a glass case that you can view as part of most Vietnam Packages. Next door to the mausoleum, the Ho Chi Minh Museum documents the leader’s life from his birth to his death highlighting his contribution to the nation’s independence.

Another Hanoi attraction that must be a part of your Vietnam Tour Package is the Presidential Palace. The former home of the Governor General of Indochina, this opulent yellow-hued mansion was built in the French Colonial style incorporating elements of the Italian Renaissance. Inspired by the Palais Garnier of Paris, the Hanoi Opera House is one of the city’s most important architectural landmarks and finds itself in most Vietnam Packages. The theater was built by the French rulers of Vietnam in the early 1900s. We also recommend paying a visit to Turtle Tower, called Thap Rua by the Vietnamese, a tower built in the middle of Hoan Kiem Lake in 1886 in honour of the folk hero Le Loi. While the tower cannot be accessed you can admire its beauty by the shores of the lake while traipsing through Hanoi Old Quarter. Don’t forget to add the famed Perfume Pagoda to your Vietnam Tour Package. Also called the Huong Pagoda, this Buddhist temple complex is built into the limestone Huong Tich Mountains and is a popular pilgrimage site.

On your Vietnam tour, a short drive from Hanoi takes you to the emerald waters of Halong Bay. A popular stop among Vietnam Packages, Halong Bay is a natural wonder of the world and a UNESCO World Heritage Site. Strewn with limestone karsts and isles, Ha Long bay draws visitors from all over the world. Of the nearly 2000 islands that make up the bay, only forty are inhabited. We suggest visiting Cat Ba, Pelican Cave and Hang Trinh Nu with its grotto shrine as part of your Vietnam Tour Package. The Bay is best experienced on an overnight cruise on a traditional junk boat from which you can enjoy the magical sunset and wake up to the waves lapping against the boat. On your Vietnam tour, you could also visit a floating fishing village to see first hand the lives of rural Vietnamese fisher people.

Choose Vietnam Packages that take you to Ho Chi Minh City, the largest city in Vietnam.  The charming city is home to pretty French colonial mansions, somber Vietnam War memorials, palaces and temples. Formerly known as Saigon, Ho Chi Minh City is popular among tourists for its mix for modernity and old world charm. The city is home to an ornate Hindu Temple that should be added to your Vietnam Tour Package as well as a beautiful French style cathedral. The colourful Mariamman Temple was built in the 19th century by Indian traders and is one of the oldest temples in Vietnam. Dedicated to the goddess of rain, Mariamman, the temple is built in the traditional Dravidian style with a vaulted gopuram. The Saigon Notre Dame Cathedral, located in downtown Ho Chi Minh City, was built by French colonists in 1863. The lofty spires, bell towers and stained glass windows make the cathedral worth a visit on your Vietnam Tour Package. History buffs will enjoy the War Remnants Museum that details the horrors of the Vietnam US War that lasted over three decades. The Cu Chi Tunnels are also a popular attraction in Ho Chi Minh. This network of tunnels was used by Viet Cong soldiers during the Vietnam War. On your Vietnam tour package, you can explore these tunnels on a guided tour and try your hand at firing M16 rifles on their shooting range. Other relics of the War include the Reunification Palace that was an important army base with tunnels, warm rooms and tanks that date back to the 70s. In fact a tank crashing through the gates of the Reunification Palace marked the end of the Vietnam War. The Palace is an essential part of most Vietnam Packages.

One of the best examples of French colonial architecture in Ho Chi Minh City and perhaps all of Vietnam is the Central Post Office in Ho Chi Minh. This ornate, canary yellow structure was built in the 1800s by Alfred Houlhoux, the chief architect of French Indochina.  The brightly coloured interiors and vaulted ceilings take visitors back in time to the height of French rule in Vietnam.

The southern-most edge of Vietnam is Mekong Delta, the region where the mighty Mekong River drains into the sea. The place is a powerhouse of biodiversity with thousands of plant and animal species calling the Delta home. You can explore the charming floating markets in Can Tho and meander through the canals on your Vietnam Tour Package.

For a taste of Vietnamese life in the 17th century, make your way to Hoi An. A trading post for spices, silk and porcelain, Hoi An saw an influx of traders from Japan, China and France for over four hundred years with each country influencing the city’s culture and architecture. Not unlike a time capsule, the city is virtually unchanged from its glory days. Chinese pagodas, wooden huts, French colonial villas and a Japanese bridge, all beautifully preserved to make this picturesque town a part of the World Heritage List.

The Riviera of the South China Sea, Nha Trang is a beloved holiday destination for beach bums and connoisseurs of sun and sand. The seaside resort is known for endless white sand beaches, scuba diving, desolate islets and mouthwatering seafood. While you are in Nha Trang, make the Po Nagar Cham Temples a part of your Vietnam Tour Package. This Hindu temple complex was built by the Cham people between the 8th and 11th centuries. The beautiful brick temples are dedicated to the Goddess Po Nagar and the Gods Shiva and Ganesh. On your Vietnam tour, a visit to the complex is a mandatory stop at all Vietnam Packages. The town is also home to several Buddhist pagodas including the stunning Long Son Pagoda with its colossal white Buddha and the Suoi Do Pagoda that was built in honour of the Vietnamese goddess of mercy, Qua Am.

Vietnam is an undeniably beautiful nation of lush paddy fields, palm fringed beaches, pagodas, and communist citadels. It offers a magical mix of urban bustle and rural tranquility that draws travellers from all over the world; something that must be seen to be believed. 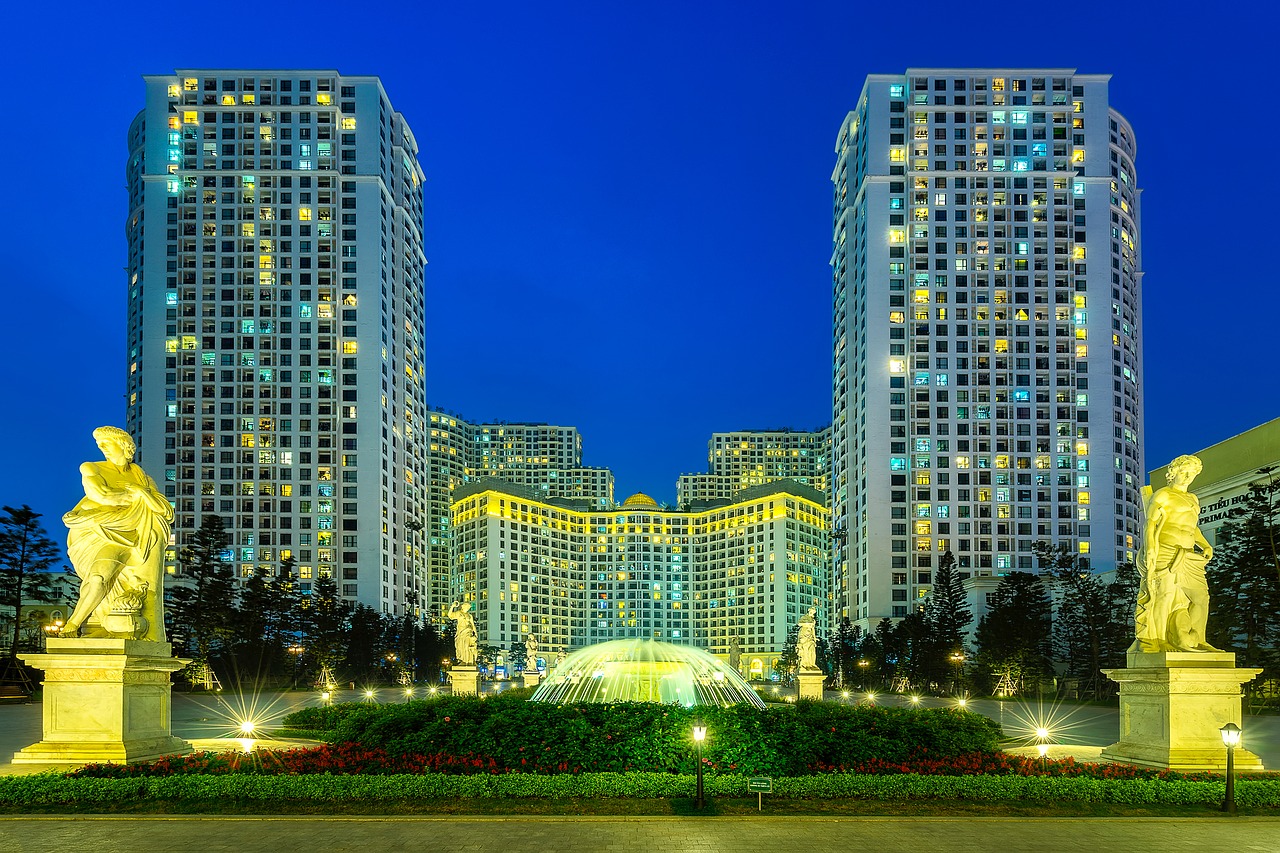