Grab your ticket to travel through the eternal wonder of ancient civilizations that spell absolute enchantment as you move with the sands of time! AlUla, The World&#39;s Masterpiece, is one of the Arabian Peninsula&#39;s oldest cities and the location of Hegra, Saudi Arabia&#39;s first UNESCO World Heritage site. This archaeological site, formerly at the convergence of The Silk Road and The Incense Route, has only lately been unco Read More

Grab your ticket to travel through the eternal wonder of ancient civilizations that spell absolute
enchantment as you move with the sands of time!
AlUla, The World&#39;s Masterpiece, is one of the Arabian Peninsula&#39;s oldest cities and the location
of Hegra, Saudi Arabia&#39;s first UNESCO World Heritage site. This archaeological site, formerly at
the convergence of The Silk Road and The Incense Route, has only lately been uncovered by
the globe. It is rich in historical, geological, and geographical relevance. There&#39;s a reason it&#39;s
dubbed &quot;The World&#39;s Masterpiece.&quot; There&#39;s enchantment in the canyons, and civilization is
engraved on the walls. AlUla is a synthesis of the past, present, and future.
Today, this picturesque region welcomes you with AkbarTravel’s alula tour packages to its
twisted lanes of the ancient town, monuments, archaeological remains, sand-swept dunes,
intact tombs, and historic buildings that contain 20,000 years of human history! The territory is
easily accessible if you select our alula packages that take you via Prince Abdul Majeed Bin
Abdulaziz-Mogayla Airport (ULH), and all major attractions are within a short driving distance.
The freshly restored airport is one of the largest in the Kingdom and has just been certified as
an international airport, with Saudi Airlines and Flynas serving it.
Although no direct flights from the UK are currently available, Saudi operates daily connecting
flights from international hubs Jeddah and Riyadh. Saudi and British Airways offer nonstop
flights from London to Riyadh, Jeddah, and Dammam. If you have chosen Akbar Travel’s alula
tour package, then when you land, you may easily travel by using the transfer services offered
by us or a variety of taxi options at your own price. Apart from the al ula tour package price
inclusions, you can also rent a car with or without a driver, or utilize the well-known ride-sharing
service Careem.
Here are a few experiences listed as an important part of any al ula travel packages that you
must indulge your senses in when you’re in AlUla.
1. Elephant Rock (Jabal AlFil):
This rock formation, fashioned like an elephant with a distinct &#39;trunk&#39; and &#39;body,&#39; has
captured the interest of discerning photographers all around the world. This breathtaking
rock formation, shaped by millions of years of wind and water erosion, is a non-ticketed
experience with ideal viewings either sunrise or sunset to see the hues shift over the
rock. Visitors may drive easily up to the rock, where a café serves food &amp; beverages
before you take your seat in the cosy recessed space and appreciate the famed
geomorphological phenomenon.
2. Stargazing at Gharameel:
AlUla has a desert terrain with amazing rock formations covering more than 28,490
square kilometres. Drive 90 minutes north of the Old Town for an unforgettable
astronomy experience. A Rawi will relate legends from the past while seated on a
handmade woven carpeting, beside this spectacle of naturally formed rock structures
rising up to the sky in the desert. The sky here is as black as it gets, with no light

pollution, and you can plainly see the Milky Way glittering overhead. The tour includes
an Arabian experience with supper, but travellers need arrive on time to view the sunset
sky painted in oranges, pinks, and gold before the full grandeur of the desert is revealed.
3. Take a Helicopter ride:
Visitors to Saudi Arabia may see Al Ula from a different perspective with a helicopter trip
far above the historic area. Twice-daily flights are ferrying visitors over the
archaeologically rich region in Saudi’s north-west, taking in seven major sites during a
thirty minute comfortable flight. Helicopter tours above one of Arabia&#39;s oldest towns,
previously exclusively available to archaeologists, geologists, and those with private
appointments, are now available to the general public for $199. The trips seek to provide
guests with a unique perspective on the richness and historical significance of a region
that was once a juncture for both the Silk Road and the Incense Route. So prepare to
see AlUla from above, on a thrilling journey that will take you over the city&#39;s seven most
iconic monuments.
4. Purchase must-have bespoke souvenirs:
Explore AlUla Old City&#39;s main Old Market Street and explore a variety of retail
businesses showcasing local craftsmen, merchants, cafés, and more. Cultural
installations, artisan shops, and local speciality dishes, to name a few, are available for
tourists to experience and learn more about AlUla&#39;s marvels. Dates are the most
common keepsakes that make excellent gifts, as they are often provided to guests
visiting a house or business. You may also give Oud Perfume, Oil, or Wood as a gift.
Oud is formed from the aquilaria tree&#39;s heartwood, the resin of which can be distilled into
oil, combined into perfume, or simply burnt as incense.
5. Explore the Hidden City of Dadan &amp; Ikmah:
Dadan, an ancient city built entirely of stone, originates from the early eighth century
BCE and is located near the oasis. Put on your explorer hat and explore the intriguing
exhibits of a dozen tomb cuttings carved into the red-rock cliffs that front the city&#39;s east
side. The sitting lion statues that are part of the famed Lion Tombs should also be seen.
In traditional thinking, lions were a sign of authority and were maybe used to mark the
burial of a member of the royal family. Other inscriptions connected to the sort of
product, seasons, agriculture, and everyday life from religious, social, and regulations of
the period can also be found. Several life-size sculptures of men as well as artifacts
used in daily life have been created. 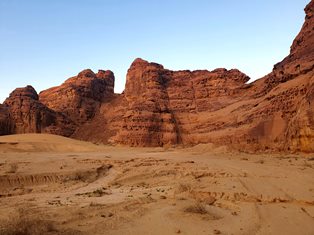 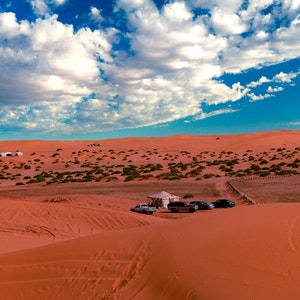