Salam Air is an Oman-based low-cost carrier with its headquarters and main hub at Muscat International Airport.

Muscat National Development and Investment Company (ASAAS), which won a government tender in January 2016, owns Salam Air. ASAAS was established in 2014 as a collaboration between the State General Reserve Fund, Muscat Municipality, and a number of pension funds. In 2015, Oman's Public Authority for Civil Aviation (PACA) issued a request for proposals for a low-cost commercial airline operator.

LATAM Group of South America has leased three Airbus A320-200s to the airline. On November 18, 2016, the company's first aircraft arrived in Muscat, coinciding with the country's National Day. From 30 January 2017, Salam Air began flights between the Omani cities of Muscat and Salalah. On February 28, 2017, the airline launched its first international service, Muscat–Dubai. It used to serve Dubai World Central, but in October 2017, it shifted to Dubai International Airport. Salam Air has launched flights to Jeddah, Madinah, and Ta'if in Saudi Arabia, as well as flights to Karachi, Multan, and Sialkot in Pakistan, since its inception. Qatar is set to be the airline's third destination, with flights to Hamad International Airport.

For the best rates on flights with Salam Air, go to www.akbartravels.com or call 800 1234 Today.

Depending on the fare you choose the above chart will be applicable. As you can see the light fare does not allow any baggage and you have to pay for any meals. 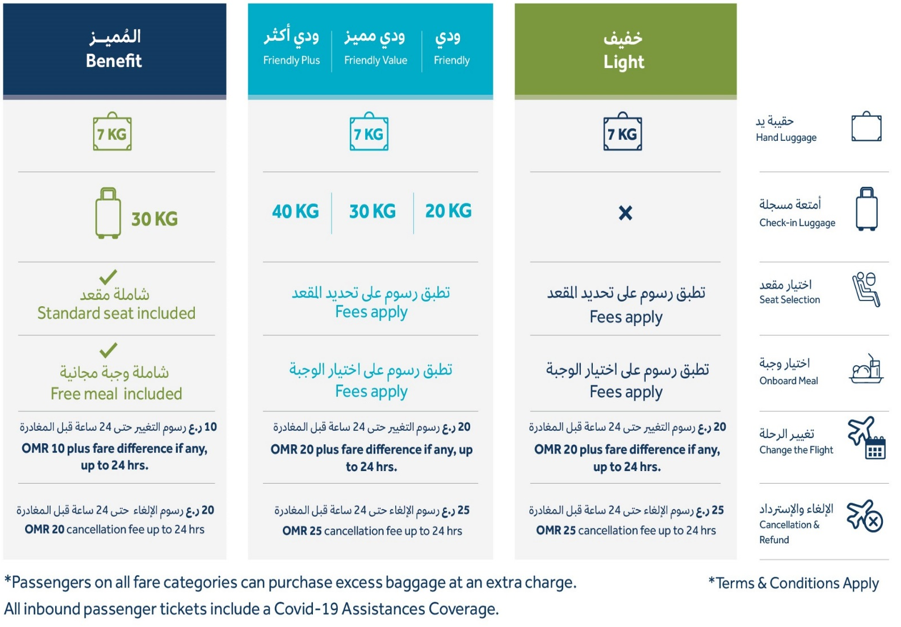 The following list of items is banned and restricted in your baggage:

You can check in online for most of our flights as early as 48 hours before departure time.

To check-in at the airport its recommended that you arrive at the airport three hours prior to departure. If you're travelling with checked baggage, deliver it to our bag drop or check-in counters within the check in deadline. Check-in and bag drop closes 60 minutes before departure.

For lower rates we advise booking your tickets at the earliest on our website www.akbartravels.com